Couldn't resist .... Are you going to blame me?

First I saw some pictures on this blog and I had to get it !!! I especially love these two charts from my all time favorite designer: Veronique Enginger!!!!

This strawberry jam chart (don't you love the colors? )

And this birdie chart (of course, I also love the colors !!!

For me who loves realistic designs, it's pure bliss 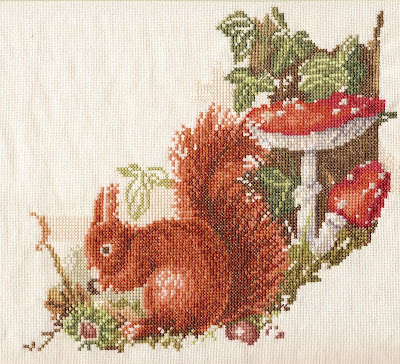 I feel I deserve want a break from school / kids activities. Good news: vacations are on thursday for Steb and Emma and on friday for Pierre. (I know! Pierre's school have such a weird schedule ...

) Pierre and Emma are going to go on vacations with my parents for 10 days (they are going to visit my brother and his family.) Then we'll go to Paris, the five of us, at the end of july for 4 days. We got a very good deal to rent a hotel appartment through Chuy's company. I registered Emma to poney camp for a week in august. (those are so expensive here but the company where Chuy work is big and they offer help for poney and sailing summer camp so we took advantage of it !!!) Chuy is going to have whole two months of "vacations" thanks to the bad economy ...

So if you haven't heard it yet, Michael Jackson is dead. Pierre told me some kids cried in his secondary school. For me, it's a little weird to think those kids cried as they didn't grow up with his music like we did ...
Did you know a study about happiness has been conducted since 1936? I like that conclusion: " In the study, those who spent too much alone time ultimately struggled. The happiest subjects in the study were those who sustained meaningful, healthy relationships with friends and family. One can never give enough hugs, say enough "I love you's," and send enough "I miss you's "You can read all about it here.
Sale season has started here (to bring more happiness to the stitchers !!!) so I took advantage to buy some cheap charts and a kit. I bought a chart that represents Madagascar, an island from where my sister in law is from. (yes, my brother and I could have married locals but we chose to marry exotic birds 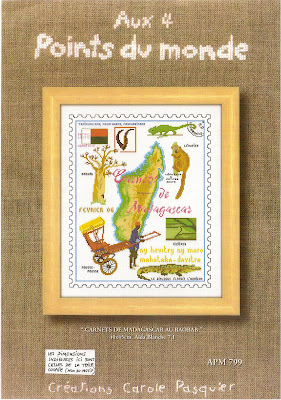 I also bought this kit that I always loved. I plan on stitching it without all the lettering. The colors are lovely !!! 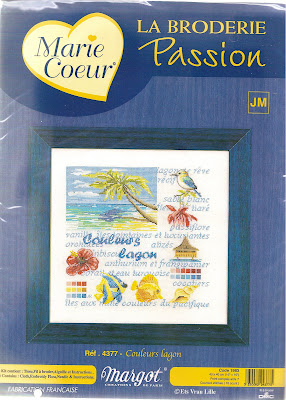 A lot of sttichers have been selling their stash lately.
One sold this chart and I fell in love with this little scarecrow guy: 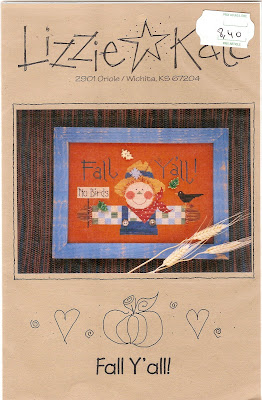 Another one was selling some Madame la fée charts (half price from the original price !!! Usually there are more expensive than that when bought used.) I chose "ballade d'autumn" that you could translate by "fall walks") 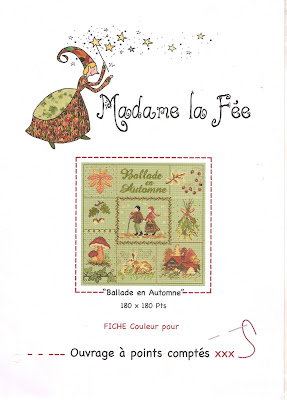 and "25 decembre". This design had been released not too long ago. I saw it being stitched on a blog and it looks very nice. Of course, all pictures are clickable! 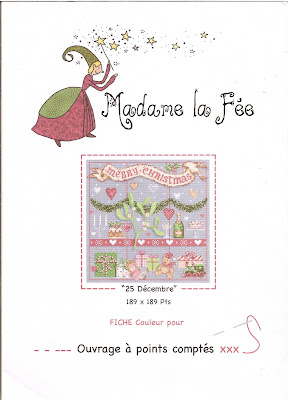 And my squirrel is getting more and more greens and browns. Yes, I'm surviving all these green ... for now !!! 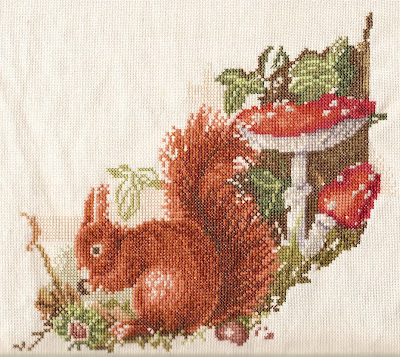 Tomorrow, my parents, Pierre and Chuy are going to try to sell our used stuffs to that could be called a garage sale/ flea market. Of course, Chuy really misses the american garage sales because it could be so cool to sale stuffs from our garden !!! I'll go there to have lunch with them with the two little ones.
Have a great sunday !!!

Yesterday I took a picture of the rose with my hand next to it. As you can see it's really the size of my hands (yes, this is my lovely hand that you see here

Sorry I didn't have time to go to the nail salon

and this is the digital watch I got when I was 11 years old - still working). Never knew they made mutant roses and sell them in supermarkets !!! 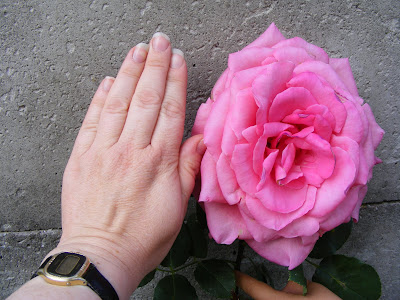 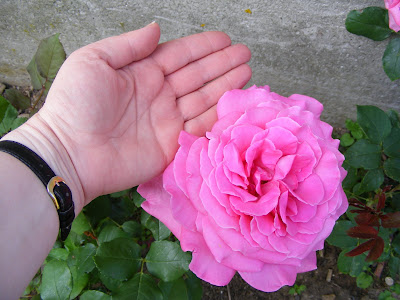 Now both of my two roses are looking down as we got a big storm and ALL of my flowers really suffered from all that water.
My squirel is growing nicely and slowly! 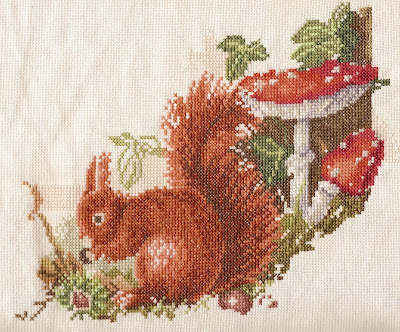 I would love to tell you more but I don't have a lot of time lately. Tomorrow, I'll show you my new stash !!! Stay tuned ladies !!!!!!

If I show flowers

I should get at least 35 comments right?

As you may recall, the house is brand new so we have the right to "play" with the garden and plant whatever we want. So I planted three roses bushes: two roses and one yellow. I got them for cheap at the supermarket so I was not really sure how they will look once they will bloom. All I wanted was to get a scented bush. And look at this amazing flower: it's huge !!!! 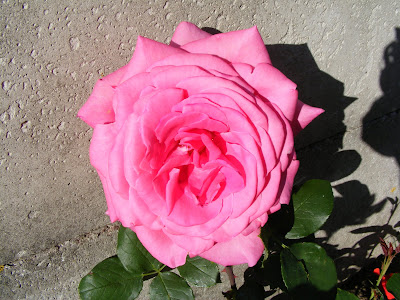 Look at the size next to Emma's hand. It seems everyday it gets bigger and bigger. Today it was the size of my hand.

( I really need to measure it because I never saw roses that big.) 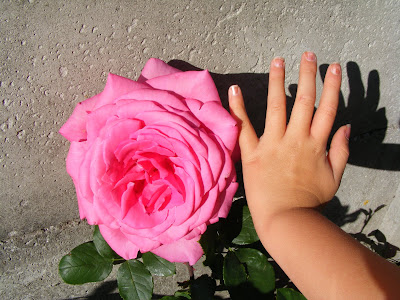 I would have never guessed it could be so huge because at first, it looks that way: 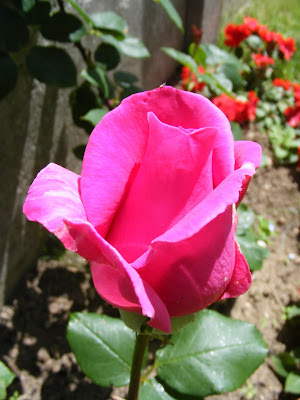 The color is really lovely: 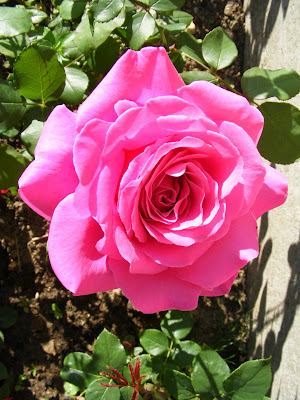 Steb decided that the neighbor's dog named "pal" could become his best friend so he decided to blow bubbles to him. As you can see eveybody is busy doing what they do best 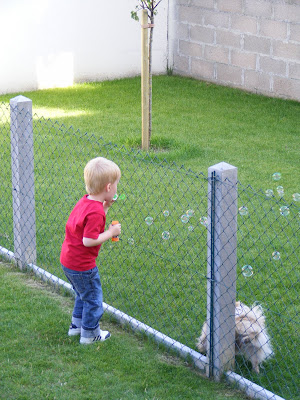 My squirrel is trying to look his best for you ladies !!! 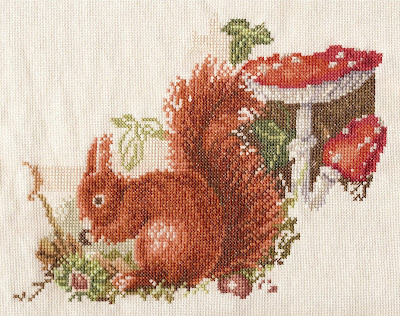 Tomorrow is the first day of sales season but Emma is going to sing in her last music class and Steb has his music show in the afternoon. I also need to not skip Emma's last violin class because for a strange reason I have the feeeling the class is already over ... oops! I also tend to forget that my dentist appointment ison thursday but for that one, I know why: I hate dentist appt

Google is celebrating father's day with two different logos depending on where you live (but not google USA - don't know why.)

My squirrel got the message and is saving nuts for next winter ! 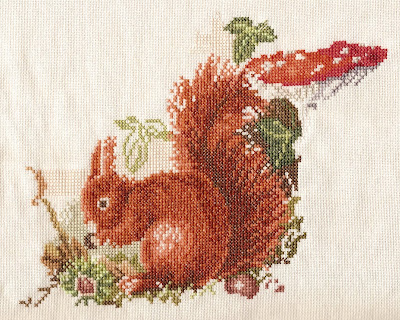 Saturday morning was pretty busy: Pierre had school (next year it's going to be on wednesdays instead !!! Yeah!!! I think we have only one saturday left !!! ) Emma had a violin class because her teacher couldn't give her the class last wednesday. Chuy had his driving class. So I played the taxi driver most of my morning ...
I started the fun colors on my squirrel: well, there are only 3 shades of red but it's a nice break from the the browns and ... green ...

When I look at the chart I feel like an HAED stitcher (understand few unnoticeable progress ) but when I look at my stitching and compare with the finished picture, I feel I'm making good and steady progress . Go figure ... 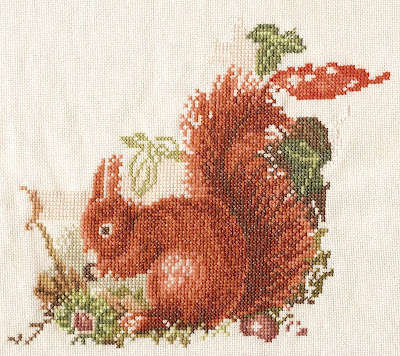 Tonight, we are invited to go to one of Emma's classmate for dinner. We almost never go out for dinner so it's going to be an interesting experience (but no stitching tonight I'm afraid ...)

Email me
Please, don't ask for copies of charts.


View my page on Stitcher's Showcase